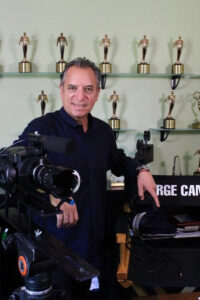 Director and Producer Jorge Cano has been in the production industry for more than 33 years. He has produced and directed films, television shows, documentaries, advertising campaigns, both in Spanish and English. Jorge Cano has won multiple awards from the film and television industry, including the highest television award, “Emmy Award” by the National Academy of Arts and Sciences of the United States, and 24 “Telly Awards.”

“Escándalo Secreto: En Plena Cuarentena”, is the comedy feature film, directed and written by Jorge Cano, that will hit the DistroTV screen for its global premiere on  February 25th. This marks the latest installment in DistroTV’s new, free-to-stream DistroTV Español channel bundle and comes on the heels of DistroTV’s recent expansion of its global distribution footprint, which now includes Latin American audiences.

“We were thrilled to work with such a diverse and talented group of artists on the making of this film, and to have DistroTV exclusively stream the worldwide premiere just makes sense,” says the film’s director, Jorge Cano. “DistroTV prides itself on streaming diversified content, content that will suit audiences of all backgrounds and interests. This movie premiere is special, because, to us, it represents the start of a movement — one in which all streaming services take a better hand in helping to profile more creative talent, and to appeal to more viewers in the process.”

Please tell us more about the film and what you did to prepare for it?

Actually what we were experiencing at the time with the confinement was what led me to prepare to do this project. What I made was a film with a current theme, what we were experiencing in total isolation, part of the idea was to create some humor in a moment of uncertainty, offer the public a space for recreation, my main idea was to broadcast a message of union, that regardless of race, gender, even language, together we can create something wonderful despite adversity. The film itself is an extremely unruly comedy, which is linked to a series of characters that are added to the task of the main character Hames Von, Agent 009, (Alejandro Gutierrez) who, from being an Air cab driver, becomes the first CIA infiltrated Agent in Colombia and in full quarantine, this is how thanks to the support of his great friend El Hacker, (Platanito, Sergio Verduzco) he manages to be recruited by Agent BIG Charles, (Pancho Moler) who puts him to the test to solve certain missions that, thanks to his charisma and the team that he integrates during the development of the story, manages to find the most feared villains in Northern Mexico; La Jefa del Norte, (Ninel Conde) and El Chato de Haya, (Armando Hernandez), until they find the whereabouts of the head of this gang of criminals, the MMR, Mario Machin Rin, (Danny Trejo).

How has covid affected your work?

It was really thanks to covid that I took this initiative, but it was an adverse effect since before covid I had presented my most recent book “Poor Rich Millionaire” at the FIL, the International Book Fair in Guadalajara, Mexico, being an author of Penguin Random House I was specially invited to give a conference and present my book, which was a success and we suppose to follow with an international media tour to promote the book throughout Mexico, Colombia, Ecuador, Peru and the United States, this would had been a 4 months event. Covid arrived and everything was canceled, I was practically isolated and without a project, like most of us. That was the turning point and is when I decided to write a story for a series, which I called “A True Winner”, and decided to sell it in order to make some money. Later the idea of ”escandalo Secreto” / “Secret Scandal” in the middle of Quarantine was born, thanks to the effect that covid generated in my work.

What do you look for in a script?

Normally, what I look for in a script is for it to be a well-told story, and when I say well-told, it must be a story that engages, moves emotions, has conflicts, heroes, victims, and villains. When I get a script that has the foundation to tell a powerful story, but it lacks some of the important ingredients, I suggest that we go back to review certain areas of the script, because I firmly believe that it is the main tool to make a good movie. You can have the best actors, extraordinary locations, even a good budget, but if the story is not good enough, the film may not achieve the desired results. For a story to have good results, it must be powerful, it must make you fall in love, make an impact. As for the story of “Escandalo Secreto” it is a story told from confinement, it was created to be shot out from the home of each of the actors, with a minimal crew, although it seems that the actors are on the set interacting, in reality 80% of the film they are not together, so this story in particular not only has the ingredients of a good comedy but it is a story that will undoubtedly make history. 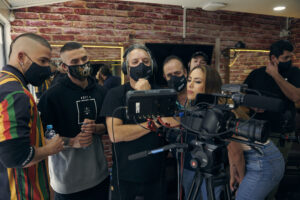 How do you select a location?

When I read a script, I imagine what the writer wants to interpret in the story and according to the emotion that I want to give to the scene as a director, this is how I select all the locations where each of the scenes will be filmed. For example, in this film we found the perfect location for the interior of the MMR house, the character of Mario Machin Rin played by Danny Trejo, but the exterior was not what I had envisioned, so we had to do the interior in a mansion, type castle, in Los Angeles, but for the outside we travel to the North of Mexico to film the Devil’s castle, created by artist Tony Wells, which is an incredible location. That’s how I select my locations for each scene in a movie.

Have you ever had to handle a difficult conflict in your career?

I believe this project in general has been one of the most difficult conflicts in my career, not only because of the way it was done, under the circumstances that it was carried out but that we were producing in the midst of a pandemic, where despite the fact that we had to move from Hollywood, to New York, Bogotá, Medellín, Cartagena, Mexico City, Los Angeles, and then to the North of Mexico, in some cities they received us with a curfew, a tremendous challenge, not only having to deal with all the situations that you fece in production but to deal with a precise schedule and making all that effort on the production set between three people, it was crazy, specially when under normal circumstances I work with a staff of 30 or 40 people. This is without a doubt the biggest conflict in my career, there are its advantages to having carried out this great project, for instance 35 years ago, I left an administrative job to go pull cables on a set, that’s where my passion was on the set and that’s how I climbed practically all the positions until I became Director of Photography and later a Director, thanks to all that education I got on the field, I dared to bring this great project to life and of course Distro.tv has shared my vision and they have been motivated enough to put the seal on it as Distro’s first original movie, it’s a blessing, I’m honored to be part of the Distro family.

What would you change in a movie you produced that you believe would make it better?

Nothing really, obviously there is always room for improvement, but in this particular case, under the circumstances that it was filmed in full quarantine, most of the time at the actors houses, with three people and even so, we were able to generate some action scenes and manage the location and the set with great diversity, it is really an accomplishment. If I was to shoot this particular movie after the pandemic, I definitely would have filmed it totally differently, it would have been another movie, but I will give you a scoop; We are already in talks to develop the series “Secret Scandal” that you can also enjoy, WITHOUT Subscriptions, WITHOUT Registration, WITHOUT Credit Cards, Absolutely FREE ACCESS at Distro.tv

What are you working on next?

Well, first of all, let me tell you that we are already working on the launch of our own IMAGEN LATINA channel, which will be launched in the next few days on the DISTRO.TV platform, and as I told you, we are already fine-tuning the details to carry out the series “Escándalo Secreto” which will be another of the projects that you can enjoy on the DISTRO.TV platform, this year I am about to finish my next book “RESILIENCE, The child who becomes King”, based on the life of Julio Bell “La Maquina” one of the most interesting stories, deep with a tremendous message that anyone who reads it, gets up and will get ahead despite adversity, it is one of the best stories that I have developed in my career, which when I gave the first reading generated such impact that by the middle of the year I will be presenting the script for the movie “RESILIENCE” to later take it to the big screen. 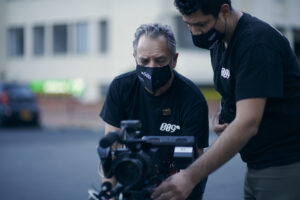